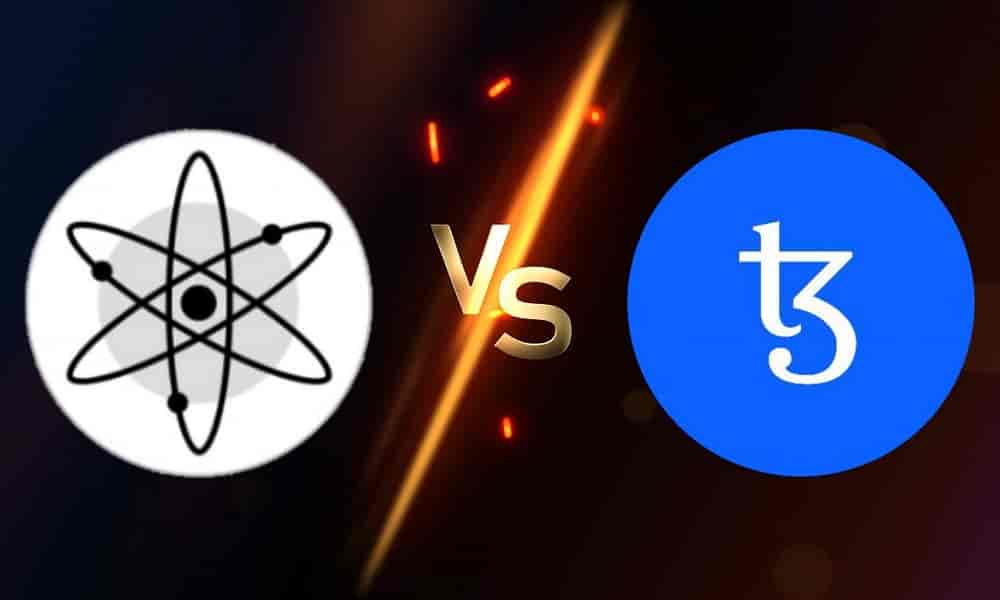 Cosmos and Tezos are among the top-performing and fastest-growing cryptocurrencies in 2022. They are attractive long-term investment options for crypto coin buyers and investors. But if you want to choose between Cosmos and Tezos, it can be difficult to predict which is a better investment option and can surpass the other’s growth. Let’s understand each of these crypto coins and how you can choose one to invest in.

Cosmos is an advanced PoS (Proof-of-Stake) decentralized ecosystem. The network introduces a variety of new technologies, and a multi-layered structure that enables it to provide higher interoperability in the market. Notably, Cosmos was built to help organize the expanding blockchain market.

The developers behind the concept label Cosmos as the “Internet of Blockchains” due to its ability to enable separate networks to communicate data and value securely. This strategy improves Dapp development in multiple ways as creators can leverage the best aspects of multiple networks to create more immersive and advanced functionalities within their Dapps.

Cosmos offers developers a host of features that make it ideal. For one, the system provides a complete suite of blockchain products. Developers can leverage these options and the full stack structure of the protocol to transact with multiple independent blockchains simultaneously. As as result, developers continue to migrate to Cosmos seeking more options.

Tezos is a layer 1 blockchain ecosystem. The network was designed to provide enterprise-level clientele access to a reliable blockchain. The protocol operates as an open-source decentralized network. Tezos was founded by Arthur and Kathleen Breitman, and today the ecosystem includes a host of researchers and developers.

Tezos is headquartered in Switzerland as part of its goal to service the larger business community. The goal of the project was to streamline Dapp creation and blockchain integration for large clients. The network accomplishes this goal through a host of cool features including a purpose-built blockchain, utility token, and developer tools.

Notably, Tezos is a for-profit corporation launched by Dynamic Ledger Solutions (DLS). The network receives support from the non-profit organization, the Tezos Foundation. During the networks crowdfunding campaign, the founders and another member of the team had a falling out.  This resulted in the founders having to negotiate to free up the millions secured during the crowdfunding campaign. In the end, the problems were resolved after the disgruntled team member kept $400,000 in funding.

What Problems was Cosmos Built to Alleviate?

There are some serious concerns that Cosmos was designed to help alleviate for the average user. For one, the network provides much lower fees than PoW networks like Bitcoin. The lower fee structure extends into the development sector as well with Cosmos having very low gas fees compared to other popular blockchains.

One of the main issues Cosmos was designed to eliminate is the lack of interoperability within the market. There are hundreds of blockchains in cooperation today. Many of these networks were built to serve specific use cases. However, since they are inoperable with other networks, developers must often recreate these protocols on competing networks to accomplish their development goals.

Cosmos enables developers to stop wasting time and effort recreating protocols that already exist. The system enables developers to integrate these advanced networks in a secure and streamlined manner directly into their Dapps. This strategy saves a lot of money and enables creators to focus on improvements and innovation, rather than rehashing old protocols.

Cosmos also helps to reduce development restrictions. The entire system offers a fully customizable experience to developers. They can create entirely new blockchains, tokens, NFTs, and much more. These digital assets can be set up to interact with other systems connected to the Cosmos hub, further improving the usability of these assets.

What Problems was Tezos Built to Alleviate?

Tezos was designed to offer users a more decentralized alternative in the business sector. The protocol offers some of the highest decentralization in the market. The platform reported an 80% spread across 450 validators and 13,000 delegators during its early days. Today, the network remains a decentralized option that has completed more than 297,017,582 total transactions successfully.

Another major issue that Tezos seeks to tackle is enterprise adoption. Large corporations have been reluctant to enter the crypto space as many of the blockchains they would want to interact with operate as pure code and have no correlation or management behind the operation. Tezos offers these users a smarter alternative that can provide the extra layers of protection they require due to their size and volume.

How Does Cosmos Work?

Cosmos is an open-source multi-layered decentralized ecosystem that combines fully functional subnetworks called zones using a system known as the ‘Cosmos Hub’. Zones are independent networks that can have their own governance, tokens, and even consensus systems.

Every zone connects and can communicate data safely using the Cosmos Hub system. The system improves performance by separating application processes from validation operations. There is also a networking layer that helps to improve communication between protocols further.

Cosmos users must hold the ATOM utility token to interact with the features of the network. The system remains valid through the use of a Tendermint BFT engine. This PoS setup enables users to stake their tokens and secure passive returns. Staking is often a more democratic option compared to mining because it doesn’t require mining rigs or technical skills.

How Does Tezos Work?

Tezos provides developers with a flexible layer one solution to launch their applications. The protocol is unique in that it supports the use of a variety of programming languages. This strategy improves onboarding as developers can continue to create using the coding of their choice. Tezos combines this multi-language approach with a Liquid PoS consensus mechanism to improve scalability and performance. The system leverages an agonistic native middleware known as a Network Shell and modules to improve the development experience further.

How to Buy Cosmos (ATOM) and Tezos (XTZ)

Currently, Cosmos (ATOM) and Tezos (XTZ) are each available for purchase on the following exchanges.

Uphold – This is one of the top exchanges for United States & UK residents that offers a wide range of cryptocurrencies. Germany & Netherlands are prohibited.

Uphold Disclaimer: Assets available on Uphold are subject to region. All investments and trading are risky and may result in the loss of capital. Cryptoassets are largely unregulated and are therefore not subject to protection.

Binance – Best for Australia, Canada, Singapore, UK and most of the world. USA residents are prohibited from purchasing most tokens. Use Discount Code: EE59L0QP for 10% cashback off all trading fees.

Cosmos (ATOM) vs Tezos (XTZ) – A Tale of Two Networks

When you examine the key differences between Cosmos (ATOM) and Tezos (XTZ), it becomes obvious that these protocols are not necessarily competition. Cosmos is more of a service provider to the entire crypto market rather than a singular competitor. Its services can be leveraged by multiple networks. In comparison, Tezos offers the type of backing and stability that makes it a smart choice for large enterprise clientele. As such, both networks could expand rapidly without cutting into each other market share in the coming months.