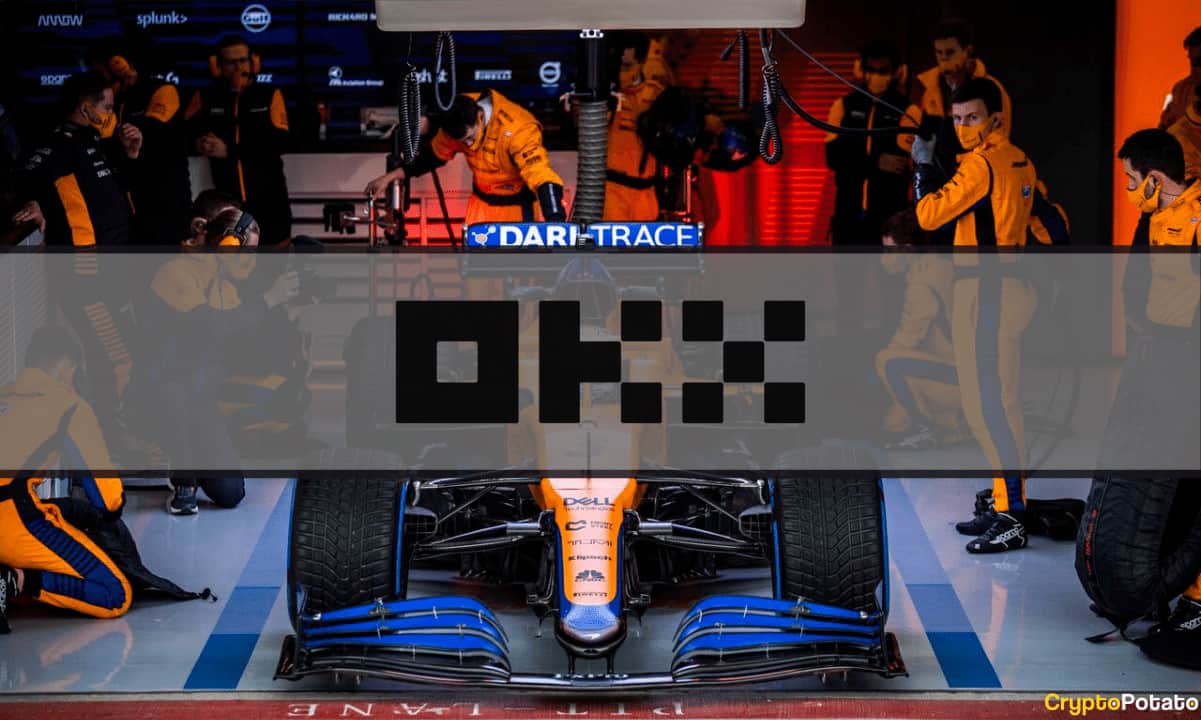 OKX, the exchange with second highest trading volume after Binance, more than Coinbase, finalized a new sponsorship deal with McLaren Racing, becoming an Official Primary Partner of the Formula 1 team.

OKX Steps on the Formula 1 Track

According to a document shared with CryptoPotato, the Seychelles-based cryptocurrency platform – OKX – signed a multi-year partnership with Formula 1’s second-most successful team – McLaren Racing. Throughout the deal, the exchange will serve as the Official Primary Partner of the squad, meaning that OKX will become the largest sponsor of McLaren Racing.

The platform will promote its brand and offer numerous cryptocurrency opportunities to F1 fans. During the 2022 Miami Grand Prix (May 8), OKX’s symbol will be carried on the rear wing, front wing, mirrors, cockpit side, nose, and inner halo of McLaren MCL36 F1 cars. In addition, Lando Norris and Daniel Ricciardo (the team’s drivers) will wear the exchange’s initials on their suits and helmets.

Haider Rafique – Chief Marketing Officer at OKX – said McLaren “stands for everything that is great about F1.”

“We innovate on our platform every day, ensuring the highest trade execution speed to our users, requiring “pit-like” team collaborations and instincts,” he added.

Addressing the collaboration was also Zak Brown – CEO of McLaren Racing. He described OKX as a “long-established crypto brand that brings innovation, analytics, and accuracy to accomplish great things.” He opined that the Miami Grand Prix is the “perfect occasion” to launch that partnership:

“The first-ever Miami Grand Prix is the perfect occasion for us to launch this significant partnership, through which we will collaborate with OKC to take our fan experience to all-new levels.”

OKX is the world’s second-largest crypto exchange in terms of market volume, falling behind only Binance. For its part, McLaren Racing is the second-oldest and second-most successful F1 team. Throughout its history, it has won 12 Driver titles, while Ferrari has 15 trophies.

At the end of 2021, the British motor racing team announced the launch of its non-fungible token (NFT) platform. The feature, dubbed “McLaren Racing Collective,” was built on the Tezos blockchain.

Through the platform, fans can purchase digital collectibles such as virtual parts of the MCL25M 2021 Formula 1 race car. Moreover, the squad decided to gift some NFTs to the first 5,000 fans who joined the platform.

Lindsey Eckhouse – a top executive at McLaren Racing – emphasized that the feature is built on the “energy-efficient” Tezos blockchain. In her view, the digital collectible marketplace provided people with a ”brand new way to connect” with their favorite F1 team.